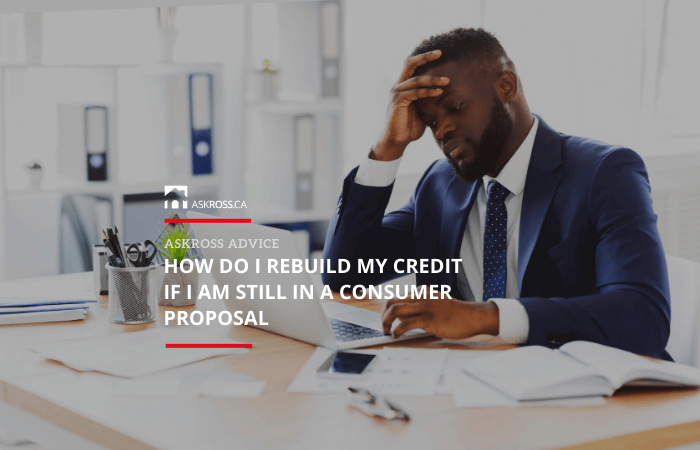 Hello Ross: I did a consumer proposal in December 2016 (after much deliberation and struggling with my conscience). I realized there was no way out. Neither my mortgage nor vehicle were included in the proposal and I have not defaulted on them.

I have been trying to follow your advice with regards to rebuilding credit. However, even with a co-signer, I could not get a (small) loan in an attempt to rebuild my credit. I was told by BMO, Bank of Nova Scotia etc. that no chartered bank could give me a loan until I was discharged.

So, I went to a credit union – same response. I suspect the only way then, is to try and save enough money to get a secured credit card. If you have any other suggestions or know of any other way of securing a loan I would certainly appreciate the advice. I would like to know, however, why I (and I can only assume others in my situation) are not informed that we will not be able to rebuild credit until we are discharged.

The company that did my consumer proposal did not inform me of this and, in fact, when I was struggling to get a loan they informed me that they have never had any other client have such difficulties with securing a loan or credit card even ones that were still in a bankruptcy. Any advice you can offer would be greatly appreciated. Sincerely,

I replied as follows:

First, it IS true – you can re establish your credit during your proposal – you don’t have to wait till discharge. But yes, it is invariably by a secured credit card – it’s not so bad – you can start off with a small limit initially – just to build up some time with some new credit. In a perfect world, you would end up with two credit cards of at least $1,000 limit – ideally $2,000 after two years.

But if all you can manage is say $500 – it is definitely worth doing now. A chartered bank would be my first choice – since later on their name on your credit report will carry more weight than say Peoples Trust or HomeTrust or even Capital One. But “beggars cannot be choosers” – if you can’t get one from a chartered bank – highly unlikely (except BMO does not offer them I believe) then next try Capital One – I think they might go as low as $300.

Over time, you can add to your deposit – taking great care to tell the company you want to keep the same account number – just increase the deposit and hence the limit. If you don’t do that, you may end up with an untidy mess that is not doing the work you require on your credit report.

Your credit history is still building points right now – for sure with your car payment, and maybe also with your mortgage – some mortgage lenders report to Equifax – a good number do not though.

What Are Mortgage Lenders Interested In After a Consumer Proposal?

That said, when the time comes to try to get a new car loan or move your mortgage – they are very interested in what NEW credit you have established since the CP – it seems a bit unfair to me – I had a former bankrupt who serviced a huge mortgage payment for two years post discharge from bankruptcy AND a large car lease payment – but the ‘A lenders’ would not consider it enough – because she only had one small credit card since discharge.

You don’t say if your car is leased or financed. If it is leased, you could consider asking for a personal loan to buy the car off lease – the rate would be high, but it would also help your credit rating. Again, I’d try your bank first – failing that, a company like Prudent Financial Services in North York specializes in car loans for people in your situation.

If your car is financed though, then you could refinance it when you finish your payments – again, try the same approach – not so much for the money, but to rebuild the credit.

Finally, I want you to get a copy of your credit report and we can go from there – you can send me a copy – maybe, just maybe there is something else derogatory in your report that should not be there and that is hurting your chances.

Finally, you can go to Money Mart and get an instant prepaid credit card called Titanium Visa – it will do NO BENEFIT to your credit history, but if you need a card immediately for the convenience aspect (parking, paying online etc. ) it’s great.

Thanks and good luck,
Ross