Expecting a drop in your income next year? Use your RRSP to generate thousands of tax refund dollars!

This is really simple – and is best used only by someone who has a husky taxable income in 2011, and expects a radically lower income in 2012. All you do is make a very large contribution before February 29, 2012; generate the associated refund when you file your taxes; and then withdraw the same money three months later. Just by moving money around like this, you can generate thousands of tax refund dollars.

Jealous of Fraser Smith’s fame as the ‘pioneer’ of leveraged investing via tax deductible mortgages, I have decided this little used RRSP manoeuvre deserves a name. Hence “The Taylor Manoeuvre”.

I have used this strategy myself in my youth, and it came up again last week when a young professional named Megan came to me for a consult. She explained she had just quit her job as an assistant marketing manager, and was starting her own business. To supplement her erratic income in the early months, and ensure she can pay her bills no matter what, she will also be working 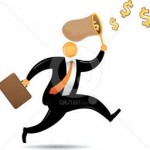 part time as a waitress in an upscale restaurant.

First of all, I applaud Megan for not being afraid to pursue her dream. Yes she is debt free, but it still takes courage to give up the good life, and pursue personal fulfillment and join the ranks of the self-employed to boot!

I checked with my tax accountant, and he confirmed Megan would generate around an $8,000 refund this spring if she makes a $20,000 RRSP contribution before the end of February.

We discussed arranging an RRSP loan for this amount – but Megan correctly pointed out she could simply draw down the funds from her personal line of credit, and transfer $20K into her RRSP at the same bank. Simple! At an interest rate of 7%, the cost of borrowing this money for three months will only be $350 (yet another benefit of having an awesome credit score).

After she has held the money inside her RRSP for three months, Megan plans to withdraw it in $5,000 increments. As an Ontario resident, each withdrawal will be subject to withholding taxes of only 10%. (In Quebec it is 21%)

One year from now, time will tell if the final result will be even better, or possibly slightly worse. You see the 10% withholding tax is like a security deposit with CRA – it is not a final number. Megan and her tax accountant are confident she will retain the full benefit. If there was an expectation of a high personal income in 2012, this would not be an attractive strategy for Megan.

What situations could benefit from massive RRSP contributions?

Of course, you need to have some unused RRSP contribution room; you need to be pretty confident in your income projections; and you would be well served to consult your own tax accountant before you jump in.