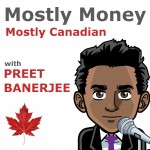 Earlier this year, Preet Banerjee asked me  if I would like to write a few guest posts at his renowned blog WhereDoesAllMyMoneyGo.com. It took me about a nano second to say yes thank you, as Preet’s credibility as a media personality and personal finance commentator is awesome. My most popular post at Preet’s site was an interview with an uber successful Toronto Realtor about pricing your home for top dollar – with all kinds of juicy insights about pricing to attract multi offers and other secrets of the best realtors.

Another post which created some mild controversy was about Tax Deductible Mortgages – wherein I had the audacity to suggest that Fraser Smith’s biggest claim to fame was to attach his name to an already existing tax strategy, and thus gain immortality as the inventor of the Smith Manoeuvre.

And at the time, RRSP’s were top of mind for most people as they scrambled to comply with the ridiculous notion that RRSP contributions are an annual event every January and February. This post was called I hope you are not waiting for an RRSP refund.

It’s a privilege to be allowed to guest post on someone else’s respected blog. At the end of the day, we all love writing, and catering to a larger audience is always preferred.