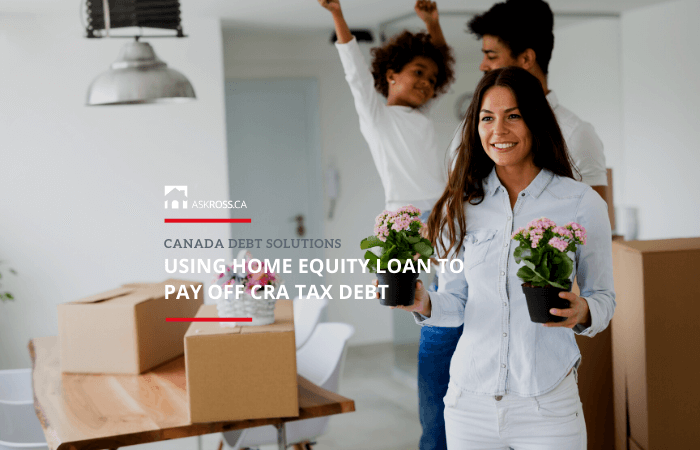 Tax Arrears Is a Debt That Can’t Be Negotiated Away, With a Creditor You Can’t Afford to Ignore

It’s not uncommon for Canadians to find they owe money to the Canada Revenue Agency (CRA) after filing their personal tax returns. And, once you get over the shock and fear of what that will mean, it’s just like any other unexpected expense: you need to tighten your belt buckle, work even harder and try to find ways to eliminate the debt before you run up lots of interest charges and late payment penalties.

Occasionally we encounter homeowners whose tax debt is so large it cannot be readily paid through the normal course of life. The end result is a debt that can’t be negotiated away, with a creditor you can’t afford to ignore.

You may find other immediate obligations are more pressing, so if you’re not able to settle the tax debt right away, it is best to stay in touch with CRA and let them know your plan to reduce and eliminate the debt. They do have some flexibility. (This is a good way to manage all debt, not just tax debt.)

Sometimes even successful people run into debt problems. We see it often with small business owners who have not set up a proper tax remittance program with CRA. One day they wake up to a huge tax liability that isn’t likely to go away.

Chao and Xiaoling own their home and three investment properties between them, yet recently they were in a big mess with CRA. Chao is a self-employed IT consultant who bills more than $240,000 per year. Chao’s corporation pays him and Xiaoling a salary of $60,000 each year.

But Chao fell behind in remitting corporate and personal income taxes and found they owe $98,000 to CRA. They also owe $64,000 in personal unsecured debt. As a result, their credit scores had slipped uncomfortably to the low 600’s.

Fortunately, they are better investors than they are tax planners, as there is at least $200,000 equity in each of their three investment properties. Chao figured they would do a simple refinance of one of the rental properties and pay off their debts that way.

But most institutional lenders were not interested in touching their mortgage application. They do not like to use a mortgage refinance to pay off CRA debt.

Fortunately, we found an alternative institutional lender who has agreed to a new first mortgage sufficient to cover the existing mortgage and ALL the debts. Sure the rate is a touch higher than the banks at 3.75% for one year, but the benefits are huge!

The last thing anyone wants is for this situation to repeat itself.

In a couple of months, Chao and Xiaoling’s credit scores will rise significantly because their unsecured debts will be paid off. Our plan is to refinance another one of their other rental properties before year-end and use the money as a war chest for additional CRA debt which will be owing for this tax year. However, this time we will be able to work with any lender we want with the best terms and lowest rates because there will be no current debt to the CRA.

How to Pay CRA Debt When You Are a Homeowner

If you’ve found yourself to be in a similar situation as Chao and Xiaoling, with CRA debt and you’re a homeowner, the approach below will likely work for you, but of course, everyone is different and we may need to tailor a specific solution for your circumstances.

When a mortgage applicant is self-employed, the lender is always going to want to see their Notice of Assessment and statement of account — proving no income taxes are owing, and that tax filings are current.

“A lenders” will typically not lend to an applicant if the purpose is to pay CRA personal income tax arrears AND of course you may have a lien by CRA against your home.

Here is a winning approach that I’ve proposed in the past:

Case Study 2: If You’re NOT Self-Employed

Kirton Johnson is a devoted husband and provider to his family of four. In recent years, he found himself in a horrible mess with CRA. He now owes $175,000 — which is a bitter pill to swallow for someone making less than $70,000 per year.

A while ago his tax returns for the years 2005 and 2009 were re-assessed by CRA and they ruled he was not entitled to those refunds because they resulted from charity donations that were disallowed.

Canada Revenue sees Kirton as one of many victims taken advantage of by tax preparers whose services formed part of a charity tax refund scheme. The roughly $175,000 of tax debt that Kirton owes is made up of $63,000 principal and $112,000 of penalties and interest!

Naturally, Kirton felt overwhelmed by his circumstances and sat down with Howard Landau of Dodick Landau, who specializes in personal debt solutions.

Howard filed a consumer proposal for Kirton, and then went back and forth with CRA for a few months as they tried to hammer out a fair resolution.

Howard called our office a couple of months ago and explained the situation. He felt if he could make a lump sum payment offer to CRA and the other creditors, that might entice them to settle the debt. (Kirton also had a couple of minor credit card balances, but the main creditor was clearly CRA)

Howard contacted us because Kirton is a homeowner in Brampton – he was hoping we could refinance his mortgage such that we could free up a large amount to make a decent settlement offer.

The challenge… or should I say challenges… plural

But as I always say, we deal with dozens of lenders, and we just need one — one “magical” lender — that is just right for the circumstances.

HomeTrust Company came through with flying colours. Even though this was a complex application with lots of moving parts, they were willing to collaborate with me, Kirton, and Dodick Landau with CRA until all parties were happy.

Knowing he could make a large lump sum settlement, Howard Landau went back to CRA and within a few weeks, an agreement was reached.

HomeTrust offered Kirton a $416,000 first mortgage at a decent rate and a thirty-year amortization period — considering his circumstances, this was excellent. It means he can wipe out the $175,000 CRA debt completely, and his overall monthly mortgage payment has increased by only $900 or so.

The process of rebuilding his credit history can commence immediately too — within three years of his proposal completion, its very existence will be gone from his credit report.

To me, this story’s message is as huge as the debt itself! Proving that even what appears to be the most insurmountable financial situation, can often be set straight with some heavy lifting by the professionals. It’s not your average joe that actually enjoys collaborating with CRA.

If you’re not self-employed but own a home, a combo of a consumer proposal and an equity loan may be needed to solve your CRA debt problems.

Ok Ross, But What If There’s Already a CRA Lien Against the Property?

I’m glad you asked. Here’s how we were able to help a client in a similar situation.

“Dear Ross, I make really good money running my own business, but the recession hit us hard, and we cannot seem to dig our way out of the debt we accumulated from a few years ago. I owe Revenue Canada over $60,000 in back taxes, and we have over $120,000 in unsecured credit. The good thing is we have around $300,000 in equity in our home and a bunch of investments. Any advice?”

This client was spending over $3,000 a month just to service his debts, and their mortgage was actually a home equity line of credit, so they were only paying interest on that, but the balance owing was not going down.

Their personal finances were quite complex, but at the end of the day, the solution to their problem was quite simple:

Refinance the house, taking the loan to value ratio back up to 80% from its present level of 60%. Use the additional $140,000 to pay off CRA and about 2/3 of the unsecured debt. Obviously, we would pay off the highest interest debt first. The clients felt they could then quickly pay off the remaining debt with their surplus monthly income.

There was one snag, however; the CRA had already put a lien on their property, and no major lender would touch this mortgage with that being the case. Doubly so because their personal credit scores were barely over 600, mainly as a result of the high balances on their available credit.

So we took a two-step approach to the problem. Initially, I arranged an open, private mortgage for them, which they used to pay off the CRA and lift the lien. We also paid off a good chunk of the unsecured debt.

We then waited two months for their credit scores to increase (to around 690) and then we applied for one single large first mortgage from an “A lender”. The lenders were now lining up to take on this mortgage!

So we paid off the private mortgage with no penalty and traded in all that expensive debt (anywhere from 9% to 21%) for first mortgage financing at only 2.99%.

We made sure the new mortgage has generous prepayment provisions since with all the excess cash flow now coming into the house, the clients want to tackle their mortgage balance and pay it down as quickly as possible.

This was a great example of our firm using all our available resources to solve a client problem. Credit counseling, mortgage brokering and access to private capital made this possible. That and a smart client who was able to see the big picture and accept our proposal.

While it’s true that your options for settling CRA debt are much more attractive when you’re a homeowner or have other assets, there is a way out for people who are not yet in such a strong financial position.

Your tax accountant can advise you on how best to communicate with the CRA in the meantime. Keeping open lines of communication with CRA is always going to be helpful. If they don’t hear from you, things might deteriorate to your wages or bank accounts being garnished. They may be able to offer you a structured repayment plan and may be willing to reduce penalties and interest.

I think you would definitely benefit from sitting down with an Insolvency Professional, to understand what other options you have. I am referring to a Trustee in Bankruptcy, who is usually also an Administrator of Consumer Proposals.

A consumer proposal might be a terrific way to manage your CRA debt. A repayment plan could be structured to pay back the debt over as much as five years, with no further interest charges or penalties. One single monthly payment for up to 60 months.

And depending on your specific circumstances, as part of your consumer proposal, your trustee might successfully negotiate a reduction in the amount owing; making the consumer proposal solution even more affordable.

We have done business with several reputable, caring trustees in Ontario over the years, and would be happy to introduce you to one for a free consultation.

Are You In The Same Tight Spot?

If you or someone you know has overwhelming debt problems, we will be happy to talk to them and explain all their options. It’s always worth consulting with a mortgage broker who specializes in this kind of work to create a custom plan which works for your unique circumstances.

And the truth is, I’m all too familiar with this situation. We’ve helped three homeowners in these exact circumstances in the past two months! There are ways to handle this, it’s just a matter of making sure you’re aware of the main factors. You’d be surprised how many solutions are out there once you start looking!